If you’re like most people, you’ve heard of Hyperloop and know it’s related to high tech transportation, but not much more. Hyperloop is a cutting-edge transportation initiative, initially created by Tesla and PayPal founder Elon Musk. The ultimate goal is to provide a meaningful alternative to fossil fuels in long range transportation, and create a system that isn’t only better for the environment, but one that’s sustainable and affordable for the average person. It’s a bold vision, and there are teams of engineers around the world working together to help make it a reality. One such team is the University of Wisconsin Badgerloop team, who have spent the last 2 years competing in SpaceX’s Hyperloop competition, and being the only team to bring home innovation awards in each of the first two competitions. We’re proud to be working with them to provide the integral drive wheel  that will hopefully see their pod log the fastest time this July at the third iteration of the competition in Hayward, CA. 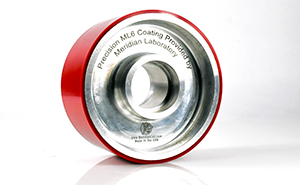 The idea behind Hyperloop is pretty simple, create a sealed tube (a lot like the vacuum tube at a bank drive up window), and design a “pod” that carries passengers through it. Currently, Musk is aiming at a top pod speed to exceed the speed of sound. The Hyperloop Alpha concept was first published in August 2013, proposing and examining a route running from the Los Angeles region to the San Francisco Bay Area, roughly following the Interstate 5 corridor. The Hyperloop Genesis paper conceived of a hyperloop system that would propel passengers along the 350-mile (560 km) route at a speed of 760 mph (1,200 km/h), allowing for a travel time of 35 minutes, which is considerably faster than current rail or air travel times. While there are safety concerns aplenty, and infrastructure that needs to be in place (not to mention creating transportation standards for an entirely new type of transportation), it is a bold vision, and one that is perfectly suited to bring the best and brightest in the engineering world together to learn and innovate together. Musk isn’t the only one trying to bring a finished Hyperloop to market, either. Virgin’s Hyperloop project is currently ongoing throughout Europe, with a recent high profile commitment to be the core Hyperloop provider throughout the middle east, the race is on, and it’s clear SpaceX has some competition, and SpaceX is counting on the element of competition to help propel Hyperloop transportation from a concept into a real world reality, hopefully faster than anyone thought it could be done. If that’s not enough, it looks like Musk has even bigger plans for the future of Hyperloop travel.

So how does it all fit together?

Momentum for a completed Hyperloop tunnel is building. Currently, SpaceX (another of Musk’s companies)  is working to build the necessary vacuum tube, and the Boring Company (started by Musk specifically to dig tunnels for his tube) prepares to plot out the routes a future Hyperloop will use. While it’s clear that SpaceX and Virgin have both invested heavily in Hyperloop travel,  that leaves the design of the pods, which is happening through a series of competitions involving students from some of the world’s largest and most respected Universities, including the University of Wisconsin, Madison. Not only does this keep the research and development costs low, but it offers an invaluable real-world practicum for Engineering students to both network with each other and future employers, and to hone their skills on the type of problems they’re likely to encounter in their future designing the technologies that transform the world we live in. 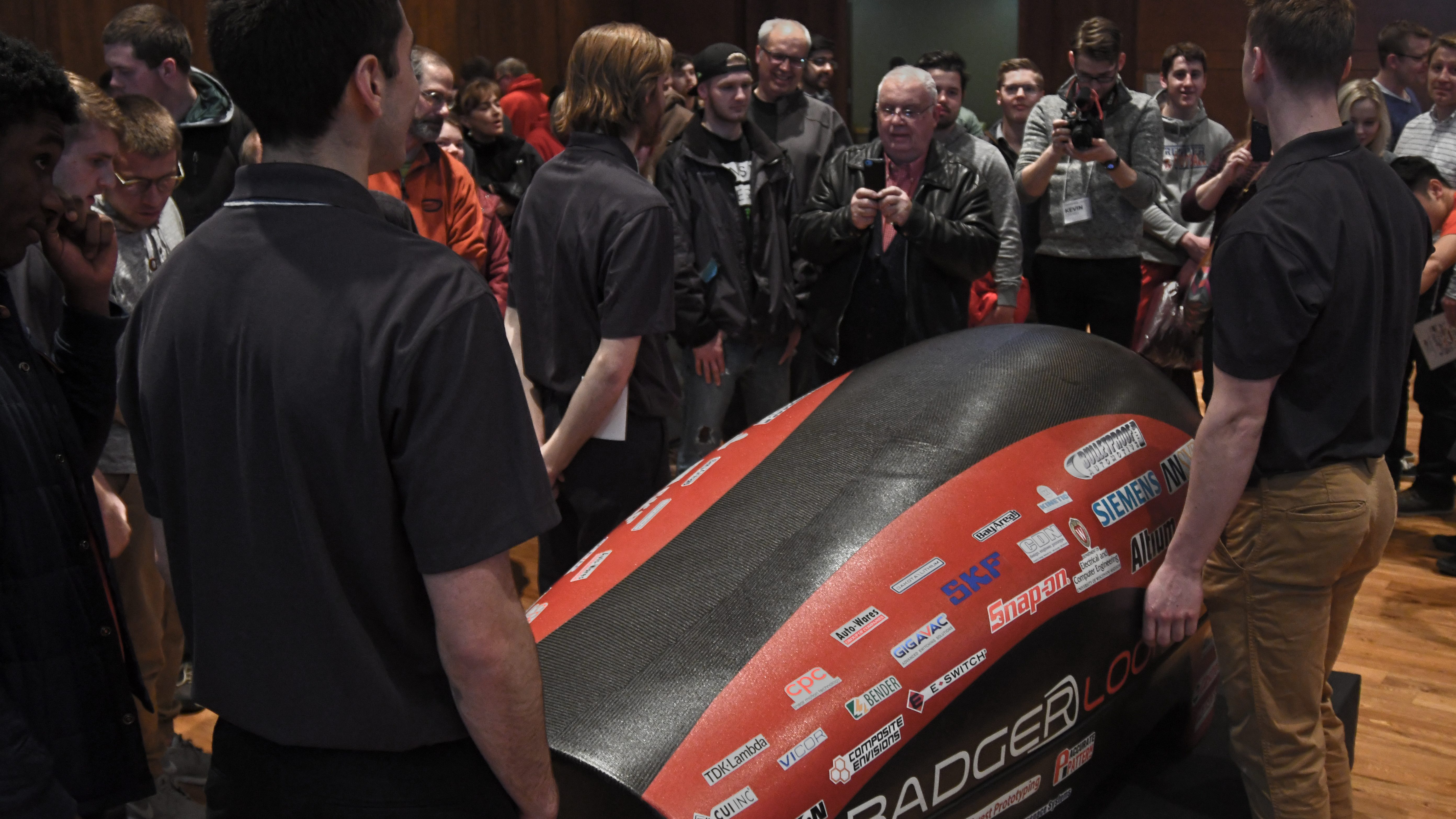 The Badgerloop Team unveils the third version of their Hyperloop Pod design for the upcoming competition in Hayward, CA

As we mentioned earlier, the pod competition is in its third iteration, and the Badgerloop team has been both talented and fortunate enough to be invited back for each new version. They also have the distinct honor of being the only team to win innovation awards in each of the first two competitions, setting the stage for high expectations as work steadily continues on laying the groundwork for Hyperloop tunnels throughout the West Coast.  Meridian is working with the Badgerloop team, composed mostly of University of Wisconsin undergraduate students, to design and develop an optimal drive wheel for their pod, which will  transfer power from their completely overhauled drivetrain system to the rail the pod rides on through the tunnel. This makes getting the thickness and durometer (hardness) of the wheel coating just right extremely important, since it’s responsible for efficiently transferring power from Badgerloop’s Next Gen battery powered motor directly to the track. While the polyurethane wheel concept isn’t new to the Hyperloop competition, Meridian’s experience in applying polyurethane to drive surfaces and wheels makes this partnership clear win/win.

Incorporating this upgraded drive wheel into the newest pod version is critical, since Hyperloop is all about speed. Matching the proper polyurethane characteristics with rotational speed and the overall weight of the pod is critical to make sure every bit of force generated translates into more speed down the track. With Elon Musk himself saying he thinks this contest will see a pod accelerate to over 300 MPH, the Badgerloop team has their work cut out for them, but they look to rely on great partnerships and a lot of hard work to make it happen. According to Mark Swartz, Badgerloop’s Propulsion Team Lead, success in the hugely competitive Hyperloop competition isn’t just about winning the battles, it’s about winning the war. “We’re learning with each competition, and we’re improving with each competition, I think all of the teams are, and it’s only getting more and more competitive with each competition.” Having joined the Badgerloop team with their initial pod, Mark’s experience in past competitions offers valuable insight and experience on what is otherwise, a typically young team. “Many of the teams we’re competing against are graduate students, and in the first contest, there were some that were entirely PHD candidates” Mark says. And with two competitions under their belt, the Badgerloop team is a perfect underdog, with more experience and determination than their youth might indicate. 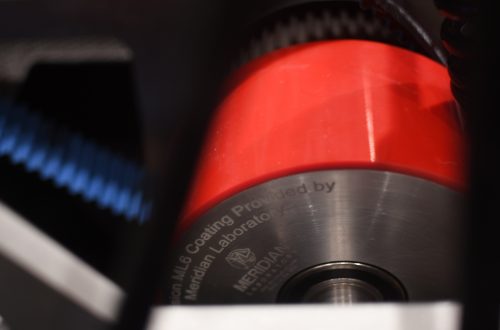 Version One of the ML6 Polyurethane Drive Wheel Meridian Laboratory created for the Badgerloop Team. Additional designs have been created to optimize for weight and aerodynamics.

While Elon Musk makes bold predictions about starting construction on his Hyperloop tunnels, The UW Badgerloop team, and other teams in the competition, are putting their expertise and creativity on the frontlines engineering the future, but they’re not doing it alone, “SpaceX has done a lot to help us at the competitions”, says Emma Krueger, Badgerloop’s Partnership Coordinator, “They genuinely want to help us solve our problems and see us succeed.” That makes a lot of sense, since it’s likely that when the first Hyperloop pod rolls off the SpaceX production line, it will rely heavily not just on the designs of the competing teams, but their ability to bring together teams of sponsors and experts to help them bring their designs to life. “We’ve worked with sponsors in a lot of ways. Some donate money so we can purchase the supplies we need, and others offer expertise and materials”, says Emma, “This might be a contest, but people don’t realize how expensive this is. Most of the things we need take real expertise and time to create, and that isn’t cheap”.

At Meridian, we have a 55-year history of investing in innovation, and we’re proud to sponsor a team that personifies the best the Midwest has to offer, creativity, work ethic, and an indominable spirit of innovation driving technology and engineering forward. We’ll be watching, and rooting on the home team July 17th, when the 3rd Hyperloop pod challenge takes place in Hayward, CA at the SpaceX test facility. Stay tuned for updates on the team and our work with them in the future, they, and we, would appreciate your support. You can check out their website at www.badgerloop.com, or look them up on your favorite social media channel (They’re Everywhere!) to stay up to date with everything Badgerloop!

If you didn’t find what you need – contact us, we are always open for new and exciting challenges.